Warning: A non-numeric value encountered in /homepages/40/d669318674/htdocs/HolidaystoCrete/wp-content/plugins/destinations/common-functions.php on line 1620
 Sfakia or Chora Sfakion in Crete. A relaxing village paradise

When people talk of the traditional side of Crete, one of the first towns or regions to roll off the tongue is Sfakia. This is a rugged and mountainous region, populated with deep gorges, ravines, stunning mountain views as little towns and villages nestled on the coastline.

The are of Sfakia has been hardly touched by mass tourism, that’s why its so popular with those who want to see the real Greece.  It was rumoured that the film makers of the 2008 film Mama Mia first wanted to film in this area but were ended up filming it in Corfu, Skiathos and Skopelos due to time constraints.

Sfakia is the name for the region in Crete which covers a large proportion of the south west coast, including the villages of Chora Sfakion (commonly called Sfakia) and Loutro.  Sfakia remains in the prefecture of Chania.

The people of Sfakia are famous within Crete as they have never allowed the region to ever become fully occupied by foreign invaders.

Chora Sfakion the seaside capital of the area of Sfakia, is a coastal village located on the Southwestern coast of Crete, 70 km from the city of Chania and 150 km from Heraklion.  It has a small beachfront surrounded by local Tavernas and a Hotel or two, also a small harbour where you can jump on a ferry to the other villages around the area and also to the dock of Samaria gorge. 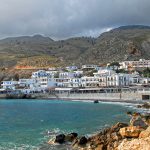 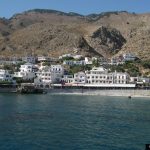 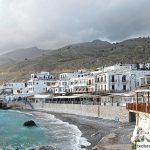 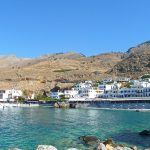 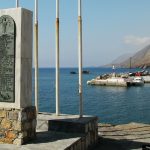 What to do in Sfakia

The best thing to do in Sfakia is relax on its unspoilt beaches, but to get out and about bird watching is very enjoyable in this area with many native and rare birds.  Take out your fishing rod and follow the locals to their favourite fishing spots at the harbour or of the rocks.

Or why not get creative and do a bit of painting or drawing.  We found a lovely website dedicated to taking a creative holiday and we found that they also do holidays and excursions in the Sfakia area.  Try visiting Cretan Creative Holidays and having a look at the services they provide for the more active holidaymaker in Western Crete.

A point of interest in the harbour area of Chora Sfakion overlooking the many small fishing boats is the war memorial from the Battle of Crete commemorating the brave soldiers and locals who fought against the Germans in WWII.

If the historic side of Crete is more your thing then there are plenty of little churches dotted around the area of Sfakia and these can easily be found on maps of Crete.

For the more adventurous there is of course Samaria Gorge and Imbros Gorge which can be accessed through most of the summer season.

Sfakia is located on the south west part of Crete and is made up of lots of quaint little villages dotted all over the coast and mountainous regions.  Sfakia is surrounded by the  White Mountains mountain range, or Madares, as they are known to the locals in Crete with 110 peaks and the biggest gorges. The area remains the most un spoilt in Crete.

There are many beaches in the region of Sfakia, we have presented you with a choice selection of photographs of the beaches, the main beaches can be found in Chora Sfakion or Loutro with others just a few minutes walk.

The photos above are mainly of Chora Sfakion beach, also Illangas beach is featured here.  One of the most popular beaches is Sweetwater beach, which although is mainly a nudist beach, does have a clothing optional policy.  The beach has its own cafe, which is surrounded by the sea. 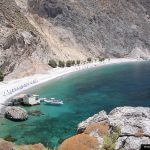 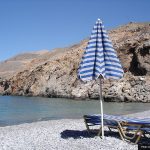 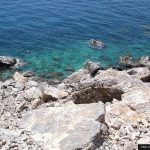 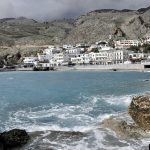 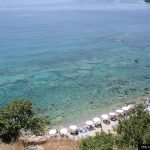 The best way to explore the area is to hire a car, and you will find empty remote beaches you can have all to yourself with not a soul insight.  The hidden bays and coves are ideal for snorkelling and fishing or just enjoying a peaceful day out in this region of Crete.

If your looking for beaches with more facilities then stay around the town of Chora Sfakion, here the beach has a few cafes and Tavernas to keep you fed and watered.  If you do venture out in search of hidden coves and beaches make sure you take plenty of water.