Samaria Gorge is one of the biggest highlights in Crete and lies to the Western part of the island. Its a walker and hikers paradise with great pictures to be had of the local wildlife and flora and fauna.

Samaria Gorge lies on the south west part of Crete in the prefecture of Chania and in 1962 was declared a National Park by the Greek Government.  It can be easily accessed from Chania via local bus or through booking the excursion via your tour operator.

Samaria Gorge is the third largest gorge in Europe and home to some amazing flora and fauna unique to the island of Crete.  You can visit the gorge throughout the summer, and we recommend that you choose to take a guided tour of the gorge, and also pay either for a full coach trip from a local travel agent, as you get taken to the gorge via coach, and at the end of the gorge in Agia Roumeli you also get picked up via boat and taken back to the coach.

Driving to the gorge yourself means you can only walk the short part of the gorge as you cant end up in Agia Roumeli, this is mainly because you are not allowed to walk back up towards the start of the gorge back to where you would have parked a car. 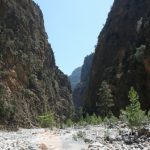 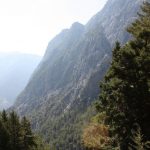 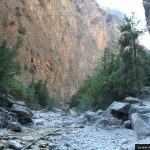 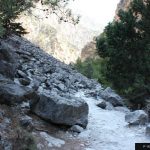 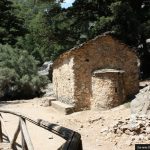 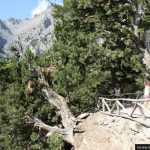 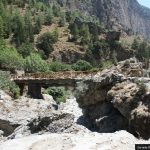 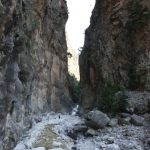 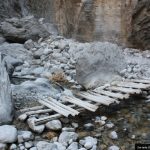 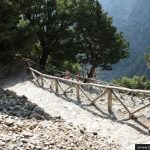 The gorge is 16 km long, not 18 km as some say.  It was created by a small river running between the White Mountains (Lefká Óri) and Mount Volakias.  The most famous part of the gorge is the section known as the ‘ Iron Gates ‘, where the sides of the gorge close to about 4 meters in, this is where the gorge closes in and you can actually reach out and touch both sides with your arms.  This is probably one of the most photographed areas of the gorge itself.

What will you see

Walking through the gorge you stop and a now abandoned village which was inhabited until the gorge became a National Park.  The village of Samaria lies just inside the gorge. It was finally abandoned by the last remaining inhabitants in 1962 to make way for the park. The village and the gorge take their name from the village’s ancient church Óssia María (St Mary). 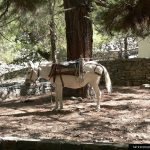 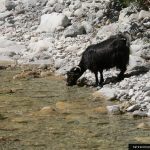 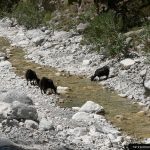 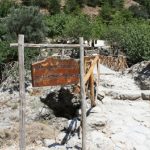 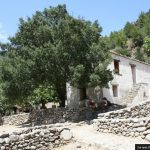 When in the park there is plenty to see, the occasional Bonelli Eagle and Griffon Vultures are the main birds of prey that circle the gorge.  You will also see the Kri Kri goat, native to Crete during your travel to and from the gorge.  The Kri Kri goat are only found on the island of Crete and are now a protected species.  Once inside the gorge you can take photographs but the flora and fauna cannot be taken with you, it is a national park after all, so resist the temptation to pick a flower or two.  Also being a national park there is a no smoking policy and no litter must be dropped, which is really common sense but your guide is always there to keep your right on the Do’s and Don’ts.

Many people ask what the temperatures and weather is like in Samaria Gorge during the summer months, and it can be extremely hot, so a hat and plenty of sun cream are recommended.  Temperatures in Samaria Gorge usually reach as high as 30 to 40 degrees centigrade.  During the winter months Samaria Gorge is closed to the public as the rainfall in Crete in this area is extremely high and rivers and flood run through the gorge.

Leading out of the gorge you have 3 km to walk to Agia Roumeli where you can relax on the beach or Taverna until the boat comes to pick you up and bring you back to your coach.  Agia Roumeli is a perfect little village sitting on the edge of Samaria Gorge, and the only access to the village is via boat or through the gorge. 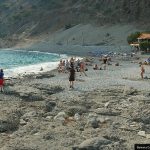 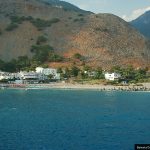 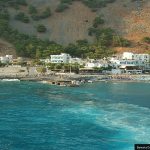 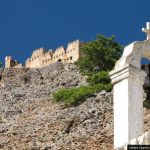 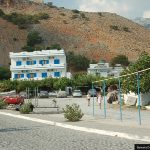 Although its quiet and remote it does get slightly busy around the village Taverna in the summer months during the day, but if you choose to spend the night then expect total tranquility and the relaxing atmosphere in Artemis Taverna or watching the sunset on the deserted beach.  Agia Roumeli has 1 hotel called hotel Calypso which offers cheap nightly rates and a warm welcome.