Warning: A non-numeric value encountered in /homepages/40/d669318674/htdocs/HolidaystoCrete/wp-content/plugins/destinations/common-functions.php on line 1620
 Malia Palace - A guide to the Minoan Palace of Malia

Malia Palace is situated just outside of Malia and draws tourists from all over the world to come and visit this once grand Minoan palace. Its not been fully excavated and rebuilt like Knossos Palace but its well worth the trip if your are interested in the Minoan civilization.

Here at Holidays to Crete we have provided a small guide to Malia palace. If you think you can add to this guide then please feel free to send feedback and other articles regarding the wonderful Malia Palace in Crete.

The larger part of the ruins that can be seen today belongs to the Neo-palatial complex.  Part of the first palace is preserved to the north-west of the complex, and there is a small oblique structure dating from the Post-palatial period in the north court.

Malia palace is approached today by way of the paved west court, which is crossed by slightly raised passages, known as “processional ways”.  There were entrances on each side of the complex, the main ones being those in the north and south wings. 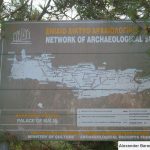 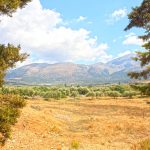 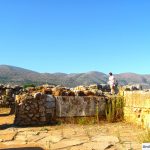 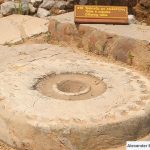 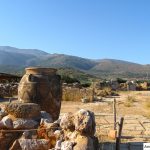 The palace is laid out around a main court, which has porticoes on the north and east sides and an altar in the middle.  The largest and most important section of the palace is the two-storey west wing, which is comprised of shrines and formal rooms and extensive storerooms.

The most important areas of it are the “Loggia”, a grand, elevated room looking on to the court which, together with the rooms o the west of it, had a ritual function; the pillar crypt with its vestibule, which also had a religious character; and between them the grand staircase leading to the upper storey.

There was another large area , that may also have been used as a theatrical arena, at the south-west of the main court, next to the famous kernos of Malia – a ritual vessel with a diameter of 0.90m.

The south wing of Malia Palace which also had two storey’s , was occupied by residence and reception rooms, a small shrine, and a monumental stone paved entrance to the palace, that lead directly into the main court.  The south-west corner of the palace was occupied by eight circular structures that were used to house grain over the winter.

The east wing was taken over almost entirely by the storage of liquids, with benches on which were placed large storage jars or “Pythos” or “Pithoi” as pictured above, and a system of channels used for collecting spilt liquid. 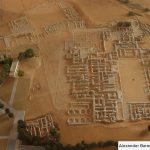 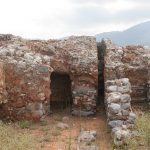 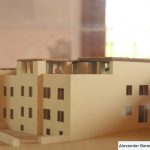 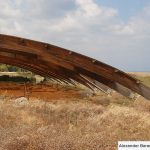 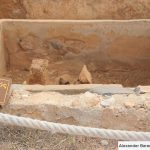 Behind the north portico in the main court is the hypostyle hall and its vestibule.  To the west of these, a paved corridor connects the main court with the north court, which is surrounded by workshops and storage rooms, and the north-west court, or the “Court of the Dungeon”.

To the west of this are the official rooms “Royal Apartments”.  In the middle is the “Reception hall” with the typical Minoan polythyra (pier and door partitions) and a lustral basin behind it.

The palace was surrounded by the Minoan city, one of the most important in Crete.  The early palace cemetery has been excavated to the north-east of the palace, on the north coast of Crete.  One particularly important grave complex is that of Chrysolakos, at which the famous Golden Bee pendant was discovered.

You can now find all the finds on display at Heraklion Museum as well as in Agios Nikolaos.  There is of course an original Malia bee Pendant on show at the national Museum of Archaeology in Heraklion, but you can also buy modern interpretations around some of the jewellery shops in Malia.  Also within these shops you can buy other amazing pieces of jewellery and statues, one notable thing to look for is the Greek helmet the Spartan warriors wore.  These can be purchased in small sizes up to life size models.