Warning: A non-numeric value encountered in /homepages/40/d669318674/htdocs/HolidaystoCrete/wp-content/plugins/destinations/common-functions.php on line 1620
 Kastelli & Kissamos - The home of wine in Crete

Kastelli is actually the capital town of the small area of Kissamos in the far north west area of Crete. Kastelli is located just 42km west of Chania with a population of roughly 3000 people.

The home of wine

Kastelli is known more for its olive oil and wine making than being a popular tourist resort, and it prides itself on this.  Kastelli is a town for those looking for the real Crete, with traditional blue door fronted houses and Tavernas on the beachfront.

Kastelli is also the home of the famous Kissamos wine you will find in many a Cretan Taverna around the island.  Located in a sheltered bay, in the Gulf of Kissamos the town sits on a lovely sandy beach which stretches throughout the town.  The actual town is located on the ruins of the original city of Kissamos once stood, and within the area there are quite a few archaeological sights for you to visit.

Places of interest in Kissamos & Kastelli

Near the village of Ano Paleokastro which sits just 7 km south of Kastelli Kissamou you will find the ruins of Polyrinnia, a ruined city sitting on the hills above Ano Paleokastro.  The city was founded by the Dorian’s in the 6th century but the inhabitants found themselves constantly at war with Kydonians of Chania.  When the Romans ruled over Crete they fortified the city of Polyrinnia and it became the administrative centre of the west side of the island.

The Venetians also used the fortified city as a fortress during later years, so the ruins stretch back some time with some very interesting architecture.  Expect to see an aqueduct built by Hadrian himself as well as many other Roman ruins. 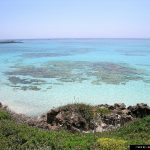 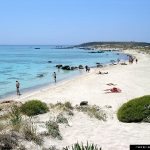 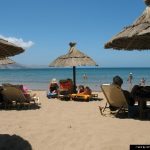 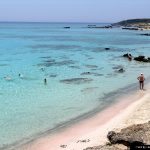 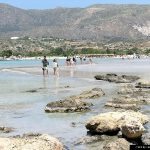 The next place worth exploring is the town of Falassarna, famed for its beautiful sandy beach and crystal clear waters.  The town is just like Kissamos and is mainly agriculturally based, but there are of course a few small hotels, and some wonderful traditional Greek Tavernas serving up mouthwatering dishes like Stifado, Souvlaki, Gyros and Moussaka.

The main reason to visit the area of Falassarna is the ruined town of the same name which sits just 300m from the sea, it just shows how much the seas have risen over the past 2000 years.

Another excellent place in the area of Kissamos is Ennia Horia (the nine villages) which sits in the more mountainous regions of Kastelli.  The villages that form part of Ennia Horia are Topolia, Koutsomados, Vlatos, Elos, Pervolia, Papadiana, Amidagakofelli and Kambos and Milia.

The area these villages sit in is well known throughout Crete for its lush greenery and chestnut trees.  A point of interest is the village of Milia which was rebuilt in a traditional style using funds from the EU, you can rent out these villas directly for a weekly fee.

To the west of Kissamos is the wonderfully wild Gramavoussa peninsula, the peninsula is covered with rocky peaks, covered with thyme and oregano, as well as local flora of Crete.

The most famous part of this area is the beach of Balos,  its a lovely white sandy beach overlooking the island of Gramavoussa and situated between the Tigani cape.

To get to Balos beach, then follow the road from the village of Kaliviani, its more of a dirt track but well paved in places.  You would need to hire a car to get to the area, preferably a jeep that can cope with the rugged area. 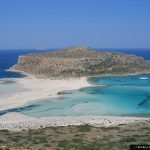 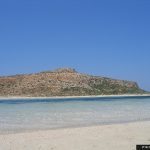 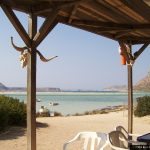 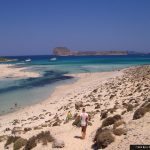 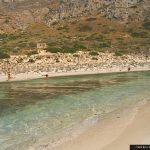 The beach of Balos is probably one of the most photographed in Crete, and its nowadays its quite easy to access from the Kaliviani road.

In some of the pictures you will see a Venetian fortress, built to defend the island of Crete from the Turkish invaders.  It was also home to ruthless pirates who used to lay in wait for merchant ships and rob them of their cargo, sinking their ships.

You can explore Gramavoussa island if you have time, and go into the fortress ruins and get some great views over the beach of Balos.